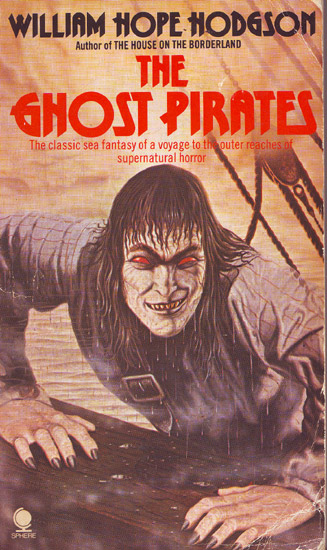 Experience Terror on the Ocean

The next instant, they must have seen the light from our lanterns; for I heard their footsteps, coming along the deck at a run.

They came the starboard side, and just abaft the fore rigging, one of them stumbled and fell over something. It was the First Mate who had tripped. I knew this by the cursing that came directly afterwards.

He picked himself up, and, apparently without stopping to see what manner of thing it was that he had fallen over, made a rush to the pin-rail. The Second Mate ran into the circle of light thrown by our lanterns, and stopped, dead— eyeing us doubtfully.

I am not surprised at this, now, nor at the behaviour of the Mate, the following instant; but at that time, I must say I could not conceive what had come to them, particularly the First Mate. He came out at us from the darkness with a rush and a roar like a bull and brandishing a belaying-pin.

I had failed to take into account the scene which his eyes must have shown him:—the whole crowd of men in the fo’cas’le—both watches—pouring out on to the deck in utter confusion, and greatly excited, with a couple of fellows at their head, carrying lanterns.

And before this, there had been the cry aloft and the crash down on deck, followed by the shouts of the frightened crew, and the sounds of many feet running. He may well have taken the cry for a signal, and our actions for something not far short of mutiny.

Indeed, his words told us that this was his very thought…

Number of items in cart: 0